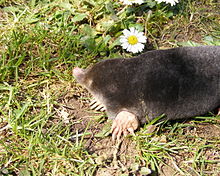 Keep tabs on these pests with remote monitors that alert us if they ever return.

Moles are carnivores with dark gray or brown fur and cylindrical bodies. Even though they look it, they are not rodents, like household mice. They lack the large incisors that identify rodents. Moles hunt and feed on earthworms and grubs, with earthworms being their favorite meal. They will even dig “larders” to keep earthworms in to feed on during winter months. They have short hind legs and large front paws that make it easier for them to dig. They live a subterranean lifestyle, meaning they dig and burrow holes and tunnels beneath the surface of the ground. They are found throughout most parts of North America and even Asia and Europe.

Moles are widely considered pests to human life and activities such as agriculture, lawn care, and gardening. That being said, they do not eat plant roots; they cause damage indirectly as they eat earthworms and other small invertebrates in the soil.

Moles are relatively harmless when it comes to humans. However, they can be extremely harmful to your landscape. As mentioned above, they don’t necessarily eat up the roots of the plants in your lawn and garden, but rather dig underneath and consume earthworms and other food sources they can find that help with the growth of your landscape.

How can you treat them?

If you have observed moles digging around your property and damaging your landscaping, we strongly suggest that you call us at 757-349-8818 or fill out a service form right here on our website. The sooner you can treat them, the better it is for the long-term health of your landscape and garden.

Ready to Get Started?

We are offering new customers up to $100 off maintenance plans.
Get $100 Off!Learn More
Free home inspection
Family and pet friendly products
Money back guarantee

Proudly serving the Southeast Virginia pest control needs for over 10 years. We eliminate bugs and pests from your home with environmentally friendly products.